A Flame to the Ground Beneath

Back to Reviews page

I get the feeling I should apologize. It was very surprising to find it - I had just gone into the tiny little music shop down the road from work for the first time to see if they had the soundtrack 'Cats' for Whitney, and got distracted looking at their metal section (which was one short column of shelving in the whole place). But among those forty or so CD cases, they had one album by Iron Savior, one of Yngwie Malmsteen's, and this - which was priced at $5.99 and I had the feeling that it had been sitting there since the album's release in 2002. But I couldn't leave it there when it was such a rare find (particularly in America where the genre is even more unheard of) and going for about a fifth of what an album usually costs in Britain. So trying to act as if I wasn't buying something showing the cast of a rejected live-action remake of Masters of the Universe, I brought it up to the counter and emerged with an unexpected purchase.

And there's no way to emphasize this enough - this album is hysterical. It's proof (as if further proof were needed) that the genre needs no parody, both in the actual musical content and the way that it's presented. The case contains the first warning signs as you open it up - the motto "No fate, only the power of will" is written down the spine inlay, and the back of the booklet introduces them as the "bringer of metal salvation". On the dedication pages inside said booklet, each band member (once again done up and posed in their own slightly different "leftover from a Gladiators audition" way) is given a daft cosmic fantasy name like Preternatural Transmogrifyer or Equilibrian Epicurius, and their real names are only listed under "Earthshape" as an afterthought on the tiny credits page at the back. Instruments are given similar treatment, with translations like "Drums" and "Keyboards" for us lesser mortals (this is not a turn of phrase of my own - it literally says "Translation for mortals:") given second place to "Keeping of the Universe's Pulse and Tamer of Chaos" and "Soulhealing Euphoria Generators", and other terms that suggest their music is for bringing cosmic harmony and aligning the planets and all the other things that heavy metal does if you're in Bill and Ted's Excellent Adventure.

A healthy dose of irony is also delivered among the credits, as one line attempts to acknowledge that the typesetting was done by Martin Furängen (also the bassist... I mean "Orchestrator of Thunder and Seismic Harmonizing"). Except that said typesetting wasn't really up to much and none of the "ä" characters on the page appear at all, meaning that even the typesetter's name (or Earthshape) is spelled wrongly with a mysterious space and an impossible combination of consonants. Clearly their seismic harmony doesn't extend quite as far as they thought.

Musically, the first thing that stands out is the screaming. The Dark Helmet-looking one third from the right, who is Daniel Heiman - sorry, Ethereal Magnanimus! - could scream for his country, and most of the songs on the album are punctuated with perfectly tuned shouts far beyond what the human voice box was ever meant to cope with. The opening song has the most of them, with Magnus sounding like he's suddenly shoved pokers up both nostrils in the middle of most lines, but sections with multi-layered superhuman shrieks appear at least once on every track. One of the songs in the middle contains a calm bit at the start with the other common staple of power metal hilarity - spoken narration about earth, wind, water and fire - before his voice launches into the stratosphere once again.

With a vocalist as incredible as that taking the lead you hardly notice the rest of the music, but what I remember of it was decent - they are reasonably like Heavenly in song structure style (i.e. none) but I'm yet to really place where they are in the genre. Perhaps somewhere near Hammerfall. I did like "Think Not Forever" quite a lot, but it's the only song that I can really comment on after the first listen because it took me until the second-last of them to stop laughing.

The final song (not including the additional instrumental) is a 12-minuter called "Highlander (The One)" and is a real treat. The booklet says it's about "the beauty of the Highlands, the movie Highlander and symbolically as a tribute to our former, virgin shape - Highlander" (as they were called when Joachim Cans of Hammerfall was still with them). Additionally, it mentions "something ultimately Metal to be acknowledged: Highlander (The One) was mixed, as the last one, during the thunderstorm of the decade on August 1st, 2002 - directly above the studio - which really isn't surprising at all regarding the pertinent magical content of the song. Baptised in the storm truly it is!" The reasons for Joachim Cans' exit are now apparent - he must have realized their lunacy shortly after they started and ran away very fast indeed.

The unrivalled highlight of the entire album comes at just over halfway through this sample MP3 of the "Highlander" song. It's as if they couldn't think of any more lyrics and resorted to a set of "Na-na-na-na-naaa", but decided that to make up for that, it had to be the most epic, powerful and over-the-top set of "Na-na-na-na-naaa" in the history of mankind.

It's an unusually short album by number of songs - there are nine tracks, but three of those are couple-of-minute instrumentals, making only six full tracks. However, in this case that can be forgiven, partly because of the tiny price I got it for and partly because it may actually make people die of split sides if it was much longer. Part of the beauty of power metal, of course, is that it doesn't often take itself seriously. Guardians of Time and Iron Savior are two science fiction metal bands that achieve a balance that works very well (Guardians of Time being rather higher on the lunacy level). But looking at the enthusiasm of this music and the worryingly cultish way that the accompanying booklet is written, you get the nagging feeling that these people genuinely believe all this nonsense. 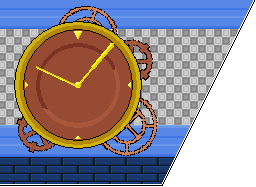