Back to Reviews page
Thanks to the modern miracle of source ports, I've been rediscovering Descent this weekend. It's just as good (in fact, better, thanks to the new capabilities given to it by the reworking) as I remember - but significantly less difficult compared to how I used to play it.

The easiest way to describe the game is probably as an unusual hybrid between a flight sim and a first person shooter. You take on the role of a rather fed up and cynical pilot in the Post-Terran Minerals Corporation, referred to in the game only as Material Defender, who is tasked with taking a small spacecraft down into claustrophobic excavations on planets of increasing distance from Earth and eradicating an unknown menace that's implied to be some sort of virus or... Asimovesque robot brain disease. Whatever it is, the effect is that it's started to turn the benevolent mining robots conveniently armed with drills, claws and cannons into manic evil flesh-devouring robots inconveniently armed with drills, claws and cannons. With any hope of recovery lost, the plan for fighting back is very sort of Team America-styled - fly into the heart of the mine to find the central reactor, cause a catastrophic failure by sticking a load of missiles up its exhaust, and then bolt to the nearest emergency exit before it explodes and takes the whole mine with it (and, now I think about the physics of it, surely a fair old chunk of the planet, too).

The game was well ahead of its time as far as the PC was concerned, most obviously featuring a full textured 3D environment just a few months after the release of Doom 2 (and predating Quake, which is more recognized for this feat, by over a year) along with enemies that would team up against you or even run away and hide round corners for an ambush, and little touches like walls that showed signs of damage. But at a time when a lot of people were trying to ride on the back of Doom, Descent's variation on the first person shooter genre was that you were in a hovering ship instead of on foot, and therefore you could roll, spin, turn or slide in six degrees of freedom, causing players to face a steep learning curve just to be able to move around, and also to have sickbags placed on standby.

Indirectly, it was the game's enormously complex control scheme that caused it to become so memorable for me. At the time, I was used to needing just a few buttons - the arrow keys for moving about, Ctrl to fire, and a couple of other things for opening things up or fiddling with buttons and the like. Going from the walking controls of Blake Stone to the flight controls of Descent is a giant leap indeed - suddenly you have to be able to pitch and yaw yourself around in four directions, "strafe" in four more, go forwards and backwards, roll left and right if the combination of those things get you the wrong way up (which they will), and fit the weapons on there somewhere as well if you have any keys left. It would be some time before Unreal Tournament finally taught me how amazing dual mouse and keyboard controls really were, so I attempted it with the default keyboard layout and failed miserably. But - and don't ask me by what thought process I came up with this idea - I had two brothers who I could always enlist to help.

Having three players around a keyboard wasn't something unusual to us - in fact we had to do it all the time for multiplayer games, because the luxury of having a separate input device for each player was something rather more common on consoles at that stage. We didn't have a joystick, or indeed anywhere to plug one in, because thanks to an absurdity of PC architecture at the time the joystick port was usually located on the sound card, and the 386 didn't have one of those. But playing co-operatively in control of one single player... that was something new to us. A visit to the controls screen later, we came up with this.

The keyboard was divided into three portions, with rough roles of pilot (me, in charge of where the ship was pointing as well as strafe controls), navigator (, who despite having an apparently small share of the keyboard had the vital role of deciding how fast we were going, as well as having all the roll controls to attempt to keep us upright and the automap, which is an absolute lifesaver in this game) and gunner (my youngest brother, who had the simplest job but also perhaps the most enjoyable).

And I seem to remember it working reasonably well, after a while. After quite a lot of awkward spinning around, flying into walls, and having to get out of the habit of confidently ramming right into every robot we came across, we eventually learned to co-operate with each other and could navigate the mines with reasonable comfort. The first level, anyway, was decent enough for the most part - though it should have been considering that we were playing on the first difficulty level, Trainee mode. After flying down a couple of slightly curved and comparatively non-torturous tunnels, blowing a door up to rescue some hostages, finding an important-looking red key and going back the way you came, you can open the red door and gently fly down into a large room, where you're confronted with the big round reactor spinning away and happily firing big red bolts at you for some reason.

Our gunner wasn't having any of that, and began hammering away at it with all lasers and missiles blazing simultaneously. Now, bear in mind that we were playing without the benefit of sound as I implied above, and also without the further benefit of knowing what the actual goal of the game was. I must have thought that like most other bosses I'd encountered in games at the time, it would just blow up when it was defeated and that would be that. Which might excuse why nobody seemed to notice the timer that had appeared at the top of the HUD until it read "T-20 S".

"It looks like it's going to explode," said , clearly being the most observant of the lot of us. A glance at it led to agreement in the form of a sort of instant random panic, with everyone who had their fingers anywhere near a movement control hitting them to pull the craft in all directions at once towards the nearest available-looking passageways. With no idea how to escape, we fought over our controls for the remaining seconds (it didn't help that the game starts strobing the lights and shaking the level around you more as the timer descreases, too) and somehow, by just moving on average in one particular direction, found ourselves in front of another tunnel that I thought led back the way we had come.

"Go in there!" somebody screamed. It was probably me as I saw the last couple of seconds tick past. And dutifully stabbed the A key, propelling us down the randomly chosen passageway in front of us. I had given up in frustration at our inadequacy of working under pressure at this point, thinking that at least we would know to watch out for this happening when we got here on our next life. But then - I promise, Bond film like as it seems, with honestly half a second to go, I suddenly saw the reassuring words "NOW EXITING THE MINE!" appear on the message list at the top of the screen. A moment later, we got the end of level cut-scene of the ship hurtling along the emergency passageway, explosions going off behind it the whole way (which always happens, no matter how long you actually had left when you got to the exit) and finally triumphantly spinning out of the mine and up away from the surface as the whole thing blew up. It was a triumphant first victory - from the jaws of death, our in-game pilot had miraculously lived!

Like every FPS of the time, you could connect to other players on a network and fly around blasting each other to bits - the game did have a real multiplayer mode. But I've never played it, and somehow I don't think that it was anywhere near as good as our invented one. 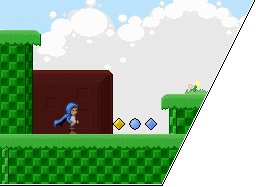