Back to Reviews page
We've started playing Resident Evil 4 now. I had never played an RE game before getting this one, but my sister and her friend said it was good, so I was confident enough to buy it without any further knowledge of what it was like.

It stars an American agent called Leon, who looks only slightly like he's in Duran Duran. The story so far involves investigating a small village in Spain in connection with the kidnapping of the President's daughter, because the Europeans are up to no good as usual. On arrival with some police officers with outrageous accents, Leon wanders towards the village, goes into a hut and asks the inhabitant for directions. And gets a knife in the face. And seeing as this is Spain and not Glasgow, he realizes that something's not quite right.

This is where the issue of the controls arises. At first, they feel absolutely dreadful - to give you some idea of what it looks like at the start, Leon takes up a large proportion of the front left of the screen, making it feel a bit like a first person shooter with your own head blocking most of the view. He seems to run diagonally forwards meaning you have to aim a bit to the left of where you're expecting to go, and aiming your weapon is a matter of accidentally shooting the sky, then the ground, then eventually hitting where you were intending to shoot.

But after a couple of practice fights (and largely due to a side mission early on which involves finding and shooting some blue medallions scattered around the place) things suddenly and inexplicably seem to work. You get used to where you're pointing, what you can see, and how to aim without taking out a large portion of the floor and ceiling first. When you're not running around and shooting, there are brief set-piece sections that resemble rhythm action games, having to press buttons at the right times to dodge Indiana Jones-style boulders and harpoon an undead version of Moby Dick.

So far, most of the game feels rather like playing a Simon Pegg film. You spend your time getting Leon to commando-roll out of ridiculously high windows or perform superhuman leaps off towers, kicking zombies in the head until they explode or alternatively shotgunning them in the chest while they're carrying lit dynamite, causing them to fall over and then explode. Even though it's said to be "survival horror" I'm not finding it particularly frightening (unlike Silent Hill, which terrifies me to pieces). You've often got more than enough firepower to deal with the hordes of the undead coming your way, with the only exception so far being the man with the sack on his head like the scarecrows out of Doctor Who, who is intent on chainsawing your head off and refuses to die, or re-die, or whatever it is that Spanish zombies do.

Again unlike Silent Hill, the enemies you face drop useful items such as suspicious health-restoring herbs or extra ammunition. Quite a lot of the time, they leave behind little treasure chests, which doesn't make much sense unless they're zombie pirates. I had wondered at first what money would even be used for in a game like this, but that was answered at the beginning of the second stage where a dodgy man with an even dodgier accent turns up with a coatful of lethal weapons that you can buy from him. This eventually becomes central to the game, getting different upgrades and weapons by using your money rather than having a small fixed set of weapons like in Silent Hill, and trying to stuff them all in your attache case Tetris-style.

I should say, finally, that I don't like escort missions in games. In fact, no one in the world likes escort missions - they always involve trying to protect a particularly dim individual or vehicle that trundles along merrily ignoring all the obvious orc/alien/Soviet/chav/Greenpeace ambushes in its way, trying desperately to clear a path ahead of it and then looking back only to realize that it's been squashed by a falling snooker table in your absence. And after the first couple of sections to where we've played so far in RE4, the game seems to be one giant escort mission as you try and get the President's daughter out of the village. But she's intelligent enough to duck out of the way of your gunfire, doesn't go off on ridiculous failed-pathfinding routes around the other side of the map, and you can even tell her to stay behind for a moment while you busily exterminate the zombies and clear a path. Overall, even the escorting seems to work. And that's probably one of the highest compliments that you can give to a game. 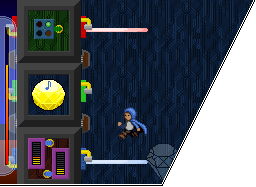